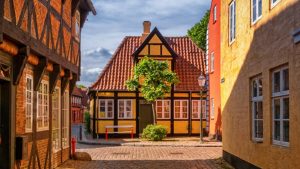 The tour goes to Jutland over the old Lillebæltsbro and follows the north side of Kolding Fjord to Kolding. Further to the west, the Kongeåen is “caught”, which is followed for a good distance towards Ribe. Kongeåen is the border between “Soenderjylland” and South Jutland, and was also the border between Germany and Denmark from 1864 until the reunification in 1920.

Ribe, which is obviously the destination for this trip, is one of Denmark’s oldest cities. It originated at Ribe Å as early as the Viking Age, when ships sailed into the town and traded. Ribe is now one of Denmark’s most picturesque and idyllic towns with 119 listed houses, which is the largest number in any Danish market town. Denmark’s oldest town hall is located at Von Støckens Plads. The house can be dated to 1496, roughly the same year Columbus discovered America. In 1709, the house was bought by the town for a town hall.

The storm surge column by the stream marks the worst floods since 1634. The castle bank contains the remains of Riberhus.

The central part of Ribe is located by Ribe Å, which has several regulated runs to former water mills; to the west it is surrounded by road and to the east by the railway.

The street system from the Middle Ages is almost intact, and among the city’s many listed buildings are Sankt Catharinæ Kloster, Tårnborg in Puggårdsgade, Ribe’s smallest house, Det Gamle Rådhus, Quedens Gaard and the restaurant Weiss’ Stue, as well as the cathedral school, which was established before 1145 and Denmark’s oldest gymnasium.

Ribe Cathedral was begun in the 12th century and completed in the middle of the 13th century. But Ribe already had its first cathedral in 948 and is thus Denmark’s oldest cathedral city. Ribe Cathedral is dedicated to the Virgin Mary, hence the official name Vor Fruekirke Maria. The cathedral has two towers. The tower in the northwest corner is called the Borgertårnet and is 52 meters high. The tower was used as a watchtower when city fires occurred, so that the alarm could be raised quickly. There are 248 steps to the top, from where there is a magnificent view of the red roofs, the marshland to the west and the low meadows to the east. It is a great experience to visit the cathedral – Ribe Cathedral / English 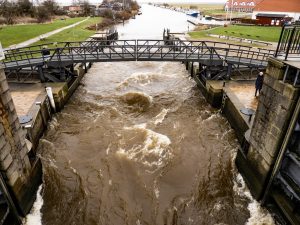 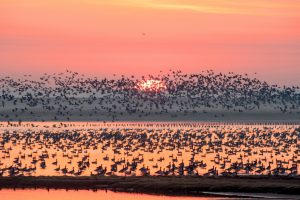 A few kilometers away is the Wadden Sea National Park with unique nature. We drive one through the area to the Chamber Lock, where there is a view of the Wadden Sea on the other side of the dyke.

The return trip goes through Southern Jutland, and perhaps also offers a visit to a workshop of a well-known MG specialist.